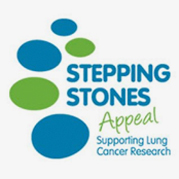 Lung cancer is the most common cause of cancer death in Wales and England. There are nearly 2000 people newly diagnosed with lung cancer in Wales every year, so it is a significant health problem. Although most cases are associated with smoking, we are seeing an increasing number of sufferers who have never smoked.

The Lung Cancer campaign at Velindre is called the Stepping Stones Appeal and funds local research into treatments and management of the illness. Although lung cancer is the most common form of cancer death in Wales, lung cancer research has been relatively poorly supported compared to other higher profile forms of cancer.